Briefly about the NEO project

The NEO project is a platform for the development of new projects, tokens and coins, which was burn as a result of the rebranding of the Ant Share project. Very often, the NEO project is called the Chinese Ethereum, because they provide similar functionality. The NEO project is very convenient for developers, because you can create your own projects on its base using the most popular programming languages: C#, JAVA, GO. More information about the NEO project you could read here.

What is cryptocurrency GAS

Cryptocurrency GAS is one of the two payment assets used on the NEO platform. In other words, GAS is the subsidiary currency of the NEO coin, which has a capitalization of more than 2 billion dollars, which allows it to occupy the 7th place in the Coinmarketcap rating. Cryptocurrency GAS has a limited number of output, which is 100 000 000 tokens, which is similar to the cryptocurrency NEO indicator.

How to get cryptocurrency GAS

There are several ways to get cryptocurrency GAS. The first method of obtaining GAS is its purchase on the exchanges such as Binance, Poloniex, Kucoin, Coinnest, where basically, the trades are held in pairs with Bitcoin.

The second way to get GAS tokens is more advantageous and attractive to most investors. To get cryptocurrency gas, you need to keep on the balance of your wallet NEO coins, for the storage which you will receive the so-called dividends in the form of GAS. For example, if you have 10 NEO coins on your balance, your annual income in the form of dividends will be about 10%, which you will get in the form of GAS. Example of calculations look at the picture, or go to the link for the individual calculation of dividends GAS. 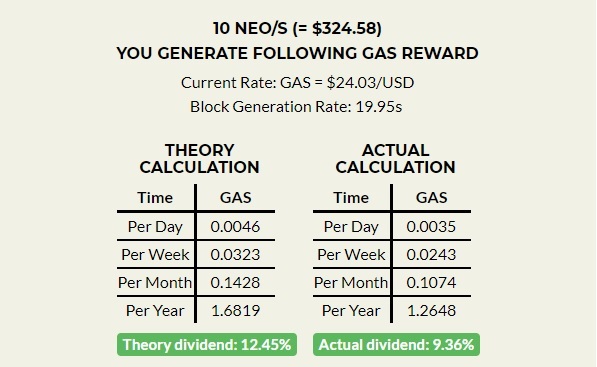 To get cryptocurrency GAS for NEO storage, you need to use a wallet that supports both cryptocurrency. This function is provided by the native Neo wallet, or use the exchanges Binance and Poloniex.

We present you GAS chart, which depicts the GAS rate to the dollar.

In conclusion, I would like to say about the prospects of the token GAS, which look very cheerfully. Because of its limited quantity, the value of the GAS tokens can jump sharply in its price. In one of our articles about cryptocurrency NEO, we forecast that in 2018 its value will reach 100 dollars. As for cryptocurrency GAS, its course will reach 60 dollars in the next calendar year, so we advise you to look at this not quite gaseous cryptocurrency. On this all dear friends, you had a blog about cryptocurrency bitbetnews, goodbye.